Our origins and journey through time.

In Nules, cooperativism dates back to around the year 1920, when there were three consumer cooperatives in the town with their corresponding fertiliser storage facilities. At that point, two workers' organisations appeared, the UGT and the Catholic Union of Rural Workers, originally formed under the name of the Workers' Union of Nules, and which had both men and women as members, giving rise to the San José de Nules Agricultural Union. Differences between the UGT and the Catholic Union planted the seed that would eventually bear fruit in later years, when a group of small and medium sized landowners joined the Catholic Union, and the creation of an agricultural union was suggested.

The early initiatives came from a gentleman working in Public Administration, Juan Abad Cantavell, a telegraph official who advised and drove the creation of the Union on the legal premise of the Agricultural Unions Act of 28 January 1906 and its subsequent Regulations.

On 6 March 1926 it had 253 registered members. On 18 April, the Workers' Union house was purchased, and on 16 May, it was agreed to pay a visit to the widow of Pedro Alcázar to buy the houses in which our main offices are currently housed. Between July and August, lending was restricted owing to the situation in which the Savings Bank found itself as a result of the meagre profits forecast and those actually obtained.

On 20 March 1927, the Union's Extraordinary General Meeting highlighted the need to launch the Cooperative Section of Acquisitions and Sales, particularly with regard to fertiliser, without which the activity developed could not possibly be considered that of an agricultural union; hence the entity would have to be dissolved in accordance with official provisions.

In 1927, the union opened up its first school, taking on Salvador Torres Rodrigo as a teacher, along with Juan Bta Company and Antonio García. The school was of great importance to members and their children, who were able in this way to build upon their cultural and human education. At this school they educated future leaders of the Union, who learned the value of service, always understood from a Christian social perspective.

In 1929, in the midst of the global depression, the Comestibles Section had to be sold off as they were unable to continue running it. At the same time they built 10 houses on Calle Cervantes, popularly known as the "Carrer la Caixa", measuring 200 m2 for the price of 7.50 pesetas/ m2, offering loans of 7,000 pesetas for their construction.

In 1933, the remaining 10 plots were sold off for the construction of housing under the same conditions as the previous ones.

In the years 1936 and 1937, economic life was very ephemeral, given the general atmosphere of distrust, with members wanting to withdraw all their savings, which was impossible owing to the high number of loans. The union was only able to continue operating thanks to the rediscounting of bonds at the Bank of Spain. At this time, only 200 pesetas could be withdrawn a month for domestic expenses, and everything had to be approved by a representative of the Frente Popular and another from the Union.

Union workers went off to war, Nules was devastated by bombings, and everything was abandoned. Union books appeared in the Plaza Mayor, almost certainly to be burned, but José Miralles Palmer, who had been appointed chairman on 20 June 1938, gathered everything together and took them in a horse-drawn cart to a room in the Provincial Organisation, where they were deposited and thanks to which they could be conserved.

Once the Civil War was over, in June 1940 the executive board, which had been ousted by the Frente Popular, met once again, and signed a public deed taking back control over the entity, which was once again named the San José Agricultural Union, having changed its name during the Republic to the Nules Agricultural Union. The chairman of the union, José Miralles Palmer, brought all the documentation back and charged the employee and subsequent director for 50 years, Francisco Flich Darás, with the task of reconstructing all the documentation, since the last completed balance sheet dated from 31 December 1936. During this post-war period, the Institute of Credit made out a loan to the union for the sum of 11,900,000 pesetas, which helped it to reconstruct all the farms within the municipal area.

The third chairman was Jaime Ripolles Cubedo, who presided over the entity from 1965 to 1986. During this period, the Agricultural Union became the credit cooperative Caixa Rural Nules 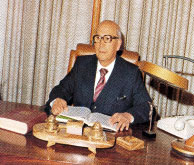 In 1970, the official head office of Caixa Rural de Nules was inaugurated, attended by the Minister for Trade Union Relations, Enrique García Ramal, and the Bishop of Segorbe-Castellón, José Mariah Cases Deordal.

In 1979, the Virgen de la Soledad Old People's Home was built, and Caixa Rural de Nules channelled all its efforts into building this social facility. That same year, the Spanish Red Cross was gifted an ambulance.

So far we have made mention of the most important milestones in our history, which are our foundation and the path we follow to continue adapting to modern times. We should also mention other important events such as the building of 15 houses in Avda. Castellón; 38 in Calle Santa Cecilia; the promotion of cooperatives such as Sonex, Nulexport, Bicoca and Sat Citrics la Plana; and the construction of new premises for the San José Agricultural Cooperative in the horticultural area of Nules, in which, in addition to the traditional sections of fertilisers, insecticides, gardening services, and irrigation installation, we have incorporated a charter from the Consum food cooperative, as well as a service station.

Currently, alongside our continuing support for our farmers, at Caixa Rural Nules we collaborate in a wide range of social, cultural, and sporting activity with all the associations present in our town.

We can help you

We can help you